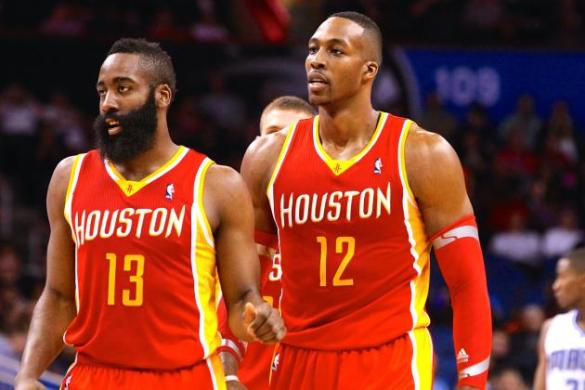 Dwight Howard’s name is once again swirling in trade rumors as the NBA’s February 18 trade deadline approaches. In what is expected to be a dull trade deadline, Howard switching teams could immediately change the league’s playoff landscape.

The Houston Rockets have been by far the most disappointing team in the NBA this season, and realistically very little of it has been Dwight Howard’s fault. Howard has played in all of the Rockets’ 44 games this season, and is has been quietly playing pretty well for a team that has looked like a shell of what we saw in last year’s playoffs.

Howard is averaging 14.6 points and 12.0 rebounds per game this season, which is right around what he has averaged over his 12 year career (18.0 points and 12.7 rebounds). Even though his scoring has been down this season, his defensive rating is tied for the highest it’s been in his entire career (104) despite his usage percentage per 100 possessions being the lowest it’s been since his rookie season (19.3).

Much of the Rockets dismay has been caused by the team’s franchise player, James Harden, who came into camp out of shape and has only recently played himself back into the player we say for nearly all of last season, when he was the league’s MVP runner-up.

Harden is averaging 28.0 points, 6.3 rebounds and 7.0 assists so far this season, which actually are all higher than what he averaged last season, as well as what he has averaged over his seven year career. These numbers have very little meaning simply because they have taken place on a surprisingly bad team, a team that currently finds itself one game under .500 and in ninth place in the Western Conference (27-28).

Houston’s poor early season performance, largely due to Harden’s lack of conditioning, lead to coach Kevin McHale being fired only six months after taking this same team to the conference finals.

Now, at the All-Star break, it makes sense for the Rockets to consider every option available to them, and one of those options is moving the more-than-likely free-agent-to-be Howard. Howard has a 23-million dollar player option for next season, one that he will likely decline this summer in search of a max contract under the newly-exploded cap.

Houston would be silly not to at least gauge the market for Howard, and general manager Daryl Morey almost has to make a franchise-changing decision before the end of next week: is Dwight Howard deserving a max contract this summer, one that will likely be around 25-million dollars a year?

If the answer to that question is yes, the Rockets can charge a high price for Howard to any team who wants to acquire him before the trade deadline, and ultimately decide to keep him with the plan to resign him this summer when he opts out.

If the answer is no, moving Howard now makes the most sense. Getting something back for an aging star who would more likely not be on your team for the 2016-17 season is the obvious best case scenario. Only Morey knows what direction he wants to take this team, and he knows a decision on Howard has to be made now.

The curveball into all of this is the high number of buyers at this season’s trade deadline, and the lack of team’s selling. So many teams are in the playoff hunt in the both conferences for the first time in a long time – especially in the surprisingly deep East – which means either no trades are going to happen this deadline, or a bunch of out-of-nowhere trades will shock everyone.

In a climate where demand for players is high and supply of players is low, this means Morey and the Rockets can demand a very high price for Howard. This may ultimately mean Howard stays put if team’s choose not to pay up, or Houston gets a team to pay that high price, meaning Morey gets significantly more back for Howard than he ever thought he could.

Teams like Boston, Philadelphia, Atlanta, Dallas and Denver all have the necessary assets to meet the likely high price for Howard, while the asset-less Brooklyn and New York are left on the outside looking in, waiting for the price to go down. Any team that acquires Howard would also have decided that the 30-year old center is worth a max contract this summer, in an offseason when every team is expected to have an additional 20-million dollars of spendable money.

A very intriguing Howard-for-Love swap would be a possibility this summer, which seemed a lot more likely two weeks ago before Love starting playing better under new coach Tyronn Lue. Morey has admired Love for a while, and was one of the teams trying to acquire the big man from Minnesota, before LeBron swooped in with the Andrew Wiggins, Anthony Bennett offer.

Despite Howard recently saying he has not asked for the Rockets to trade him, if the right deal comes along I do believe Morey would pull the trigger. Houston’s rough start to the season likely means a first round exit from the playoffs when they face Golden State, San Antonio or Oklahoma City, so holding onto Howard doesn’t necessarily make the most sense.

The Rockets’ future clearly lies in Harden’s hands, but it actually is not that crazy to think Houston should consider trading the Beard instead of Howard. A great piece by ESPN’s Kevin Pelton suggests trading Howard is not going to solve anything, because he is not the real problem. Trading Howard does, however, accelerate a rebuild for a team whose superstar is still only entering his prime.

Chris Broussard just reported something that should not change any opinions on whether Howard will actually be traded by the February 18 deadline or not.

The lack of worthy offers should have been expected: Howard is towards the end of his prime and Morey’s expected price is probably too high right now. There is still six long days before a decision has to be made on Howard, and the All-Star break only allows more discussions to be made during that time.

All of what has happened in Houston so far this season might be a blessing in disguise: the Harden-Howard combo as a team’s best two players never seemed to get to a championship level. Whether the rumors are true that they are now not getting a long, Harden is a special talent that appears to only be getting better (when he is in shape). It might be time for Howard to go, and for all of us to see what a Harden-run team looks like.